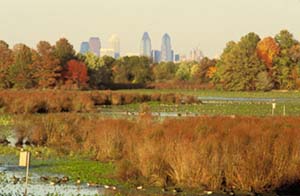 March 14, 2003 marked the 100th anniversary of the National Wildlife Refuge System. On that date in 1903, President Theodore Roosevelt proclaimed 5 acres known as Pelican Island, Florida, as public land to be protected by the federal government in order to preserve America's wildlife. Today, Pelican Island is known as the birthplace of the National Wildlife Refuge System which has grown to include 540 refuges that span nearly 95 million acres across the United States and its territories.

John Heinz National Wildlife Refuge, Tinicum, Pennsylvania - The John Heinz National Wildlife Refuge at Tinicum is located in both Philadelphia and Delaware counties, Pennsylvania, and is approximately 1 mile from Philadelphia International Airport. In 1972, the refuge was established by an act of Congress to protect the last 205 acres of freshwater tidal marsh in Pennsylvania. The mission of the Heinz Refuge is to preserve and restore Tinicum Marsh, promote environmental education, and provide visitors with an opportunity to study wildlife in its natural habitat. Today, the Heinz Refuge totals 1,200 acres, hosts approximately 120,000 visitors a year, and is home to a wide variety of plants and wildlife including over 280 species of birds, as well as fox, deer, opossums, raccoons, muskrat, turtles, snakes, fish, and frogs-of which several are endangered species.